Here it is, Easter Sunday. A week ago today, I was walking off of a plane from Europe back into Portland, Oregon (where I live). From March 11th through March 19th, the Berlin International Impro Festival created one of the most moving and thought-provoking festivals that I have ever been privileged to be a part of.  The theme of this years’ festival was “Borders, Limits, and Liberty”.

Die Gorillas, a long-standing professional improv troupe in Berlin, has been hosting the festival since 2001. They were very aware of the risk they were taking with choosing a political theme. Germany has become intimately familiar with the flight of refugees from Africa and the Middle East. It is a daily topic in Europe in general, considering how many countries are now hosting tens to hundreds of thousands of refugees.

Several members of ImproBeirut were in attendance, and they were asked to facilitate the creation of shows that embraced and explored the realities, imaginings, and possibilities of the refugee situation. They were the perfect choice for this, considering some of the work they had done with theater and conflict before. The days of rehearsal with them would lead to the shows titled “A Place to Be”. The process focused on looking at similarities and differences amongst the cast first (25 people from 13 different countries). It then turned to listening and connecting with the stories told by several refugees who came to a rehearsal to share their stories.

The show itself would use a format called a “Superscene”; wherein 4 players are asked to ‘direct’ a story/performance in four parts that the other performers will improvise with their guidance. In between the parts, the audience was asked to decide which story was least “honest”, vote it out, and eliminate it for the rest of the show. Each of the ‘directors’ were given a recent news article about the European refugee situation to inspire their piece. 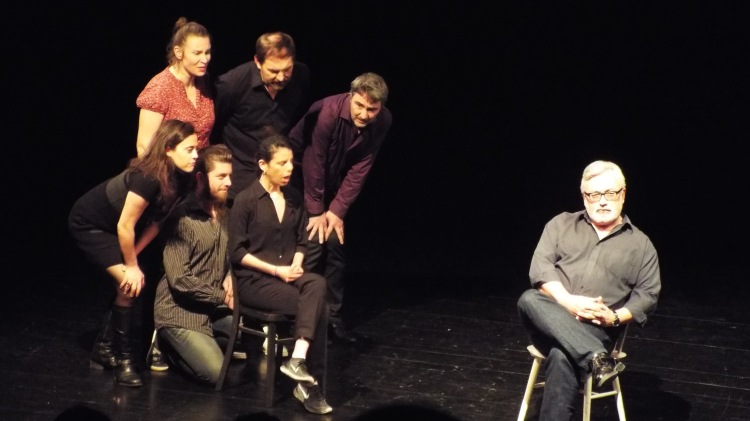 In the show I was a part of, the scenes bounced between the mundane, profound, ridiculous, moving, and intense. My favorite of the improvised stories was inspired by a news article about a Swiss family that had somewhat adopted a little refugee boy who had been separated from his parents at sea. The arc of the family integrating him and his own reticence created a compelling narrative inhabited by very realistic characters. It existed in this sweet space between the players who seemed to know the importance and fragility of this story without knowing it’s end. This made the third of four chapters incredibly intense when a social worker showed up to take him to his real parents after nearly 2 years of being with that family. The character of the mother was intense and fraught with distress, yelling and crying. The social worker merely stood and reiterated “I’m sorry, but he will be coming with me today”.

In the fourth scene, it was the family together speaking fondly of the boy and what he meant and brought, a picture of him hanging on the wall. In the dreamlike way of long form improvisation, the picture of the boy melted into a scene of the boy with his real father calling him away from the window to go to the playground. Another moment of improvised magic happened. It’s a magic that only seems to come from the aesthetic of these international ensemble-building festivals.

Much of the intensity of the performances came from hearing the stories from the people who had made the journey and we’re living in a camp at the outskirts of Berlin. One of them saw his brother shot and then ran for his life, undertook a harrowing journey through Pakistan and over the sea only to get to Berlin and discover that his fortunes were as stark at the end of his journey. He now lives in a camp where there are 200 people for every bathroom. The lines can be from 20-40 minutes long. The camps also have a hierarchy and social strata depending on how many of one ethnic group or another are in the camp, if you have a visa or not, or sometimes if you are of an upper class.

For people who practice improvisation, we know that it can go a long way in building bridges between strangers. The nature of my research was about investigating the premium outcome of this process that performers call “Group Mind”. That research was a big part of developing Spontaneous Village, an approach to building community for refugees with improvised theater.

While in Berlin, myself and several others went off to connect with refugees who were meeting at a church for coffee and German lessons. For about 30-40 minutes, we played improv games with whoever would join. Sometimes we explained in French, sometimes in English, sometimes in Arabic. For some, this may seem like a maddening proposition to bounce between all of these languages, but the outcome is always worth it. When language starts to fade and the game becomes the source of connection, tensions eased and smiles and laughter began to arrive. For the dislocated and dispossessed, those moments of play are sunshine for the soul. Even those who were shy and only watched began to get closer and get infected with smiles and giggles of their own. To me, this is a global lesson. If we put forward some effort to understand each other and set some simple rules and goals, we can connect and discover what we all have to offer.

The Berlin International Improv Festival has been doing that very thing for 15 years, and in that church in that moment, it was happening again. Not for professionals flown in from across the globe, but for the desperate who fled for their lives and the hopeful seeking a better chance who marched through the cold of a European winter to get there.

Of Conflict and the “Egg Test”

One of the highlights of this festival for me was being on a panel for a discussion of mixing politics and improvised theater.  Video of that panel discussion will be forthcoming I have been told.

On the ride over, by my request, one of the members of ImproBeirut told me all about their work with using theater tools to resolve conflict between sectarian fighters in Lebanon. One of the fighters would not attend without a live grenade for the first several meetings. Like taming a fox, they coaxed this man to distance himself from the grenade over time until he finally no longer brought it. As expected, the work they did moved the men from being enemies to being sincere friends. When the government heard this news, they tried to minimize it and hide it. Like many countries, the ‘powers that be’ profit from keeping their population embroiled in conflicts over religious and identity-based matters. According to some members, Lebanon is no different.

One of the members of ImproBeirut is persona non-grata in Lebanon because of the activist work that he has been involved in to expose corruption and injustice. The government has actually demanded on several occasions that he provide scripts of what they might say in their performance. The most recent document was about 120 pages of every possible iteration of dialogue that might happen onstage that could be construed as politically offensive. These things are no laughing matter, however. One of them had been detained and beaten by the authorities for his work, both improvised and scripted.

During the discussion, they also shared how the demonization of homosexuality was used as a witch hunt to imprison people. They disclosed that one of the main things they do to try to imprison someone is the “Egg Test”. My informant, being modest, never described the act verbally but instead used mime. Essentially, the authorities insert an egg into a man’s rectum. If it breaks, he is deemed straight and is set free. If it does not, he is a homosexual and is sent to prison. This is the political climate that ImproBeirut performs in. For the most part, they try to avoid controversy. One of the members was ordered by his father to move to Canada, where he now resides, to avoid getting swept into the controversy that led to Lucien’s detention and beating. In Lebanon, the stakes could not be higher on the freest form of expression improvised theater.